About Us:  Our Founding 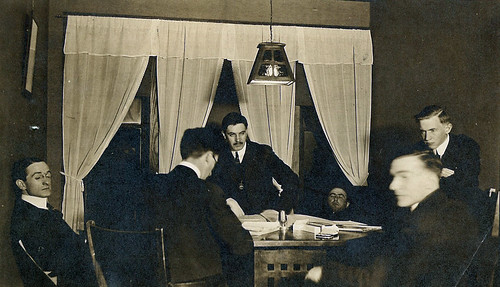 There are two versions of the story about the founding of Lambda Chi Alpha Fraternity. The first, resulting from an agreement in late 1912 between Warren Cole in Boston and Albert Cross in Philadelphia, holds that on November 2, 1909, Warren A. Cole, Percival C. Morse, and Clyde K. Nichols met at 22 Joy St., Boston, and swore allegiance to the new fraternity. The meeting had been called, by whom it is not recorded, for the purpose of considering the reorganization of the Cosmopolitan Law Club, a society of law students of Boston University, of which Cole was a member, into the Greek letter society.

The first three members were all close friends before Cole’s withdrawal from the law club, for all had been members of Alpha Mu Chi, a preparatory school fraternity. Cole was also a member of the legal fraternity, Gamma Eta Gamma, and the Grange or Patrons of Husbandry, a society of agriculturalists. The laws and rites of these societies are thought to have had a strong influence on Cole as he formulated the first regulations and Initiation Ritual of Lambda Chi Alpha.

The name Lambda Chi Alpha is thought to have been used from the beginning. The Greek letter name was not used in the Alpha Zeta minutes until April 27, 1910, however, and, as far as is known, this was the first time it was recorded.

The second version of our founding results from interviews with Cole and other early members in later years, and further investigation. When Cole entered Boston University in the fall of 1909, his first residence lay too far from the law school on Beacon Hill, so he and a varied group of youngsters rented a room at Pemberton Square, which they used for study between classes or work. This loosely-held group became known as the Tombs or Cosmopolitan Club, but did not lead directly to the formation of Lambda Chi Alpha.

Before the end of 1909, Cole moved to 22 Joy St., where he shared an apartment with James C. McDonald and Charles W. Proctor, both of whom later joined the Sigma Alpha Epsilon fraternity. Cole, however, was determined to start his own fraternity, and by the spring of 1911 had settled on the name Lambda Pi. In the fall of 1911, he moved to 35 Hancock St., rooming with Ralph S. Miles and Harold W. Bridge. On November 15, 1911, the Lambda Pi constitution, largely derived from Gamma Eta Gamma’s, was signed by Cole, Miles, Bridge, and Morse – the four founders.

Over the next month, wonderful, yet mysterious, events of great significance occurred with the appearance of our first badge, along with the change of name from Lambda Pi to Lambda Chi Alpha. A new fraternity, at once national in scope, was born. Each of the four founders bought a badge. They issued themselves a charter for Alpha Zeta, back-dating it to November 15, 1911.

From this point on, Lambda Chi Alpha progressed at an incredibly rapid rate. Cole soon wrote the original Initiation Ritual, and within one year chapters at the Massachusetts Agricultural College (University of Massachusetts-Amherst), the University of Pennsylvania, and Pennsylvania State University were installed. Titles of national officers, such as Supreme Eminent Archon, were most likely borrowed from Sigma Alpha Epsilon, and the overall design of our first coat of arms, known as the Gamma Plate, may have been inspired by the seal of McDonald’s prep school, the Worcester Academy.